Just something I did on a whim with the people at home.yuriproject.org, and they finally finished editing/cleaning it ^^. A cute yuri one shot by Asatsuki Shinobu: 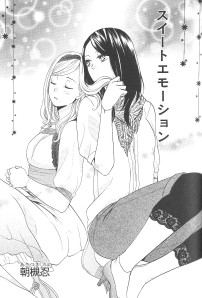 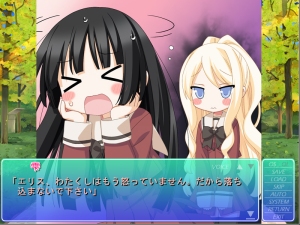 "Ellis, I'm not mad anymore, so please stop being so sad."

I know this is unrelated to Hanahira but… this game is just too cute, Shizuku still so tsundere ^^

edit: i have no idea why the title for this post was 69, lol, it’s clearly not!

Gonna have a ton of spare time for a while so I figured I could try my hand at translating. I am merely translating it, there will be a specific group of people editing it and such at a later date. Also a fantastic TLC. But that stuff is all kind of TBA at this point. Hanahira is a cute, short, and fun (shoujo-ai) game. It was the first game I read in Japanese, so I figured why not.

UPDATE: 2/12/2012 Birthday + wisdom teeth extraction = some time off translation, but everything should be back on track now. Basically over 1/3rd done at this point, the rest of the scripts are all shorter than the ones I’ve already done for the most part ^^.

You can contact me at irc.rizon.net #tengutrans if you have any questions. (nick is unkind)

Hi, so my first review for this blog will be Sono Hanabira ni Kuchizuke o: Tenshi no Hanabira Zome. This is the eighth game in the Sono Hanabira series. It is created by a doujin circle called Furugiya. I am reviewing it because it is the second game I’ve read in Japanese and I thoroughly enjoyed it.

Synopsis/Story Introduction:
The game begins showing the daily life of a girl (the protagonist) named Kirishima Shizuku (霧島雫) and her first interactions with Shitogi Ellis (an exchange student on her first day of school) （粢エリス）. Shizuku is then selected to show Ellis around the school. The primary setting for the game is their school, St. Micheal’s girls academy.  Ellis and Shizuku are vastly different people, especially personality wise. Ellis is a whimsical, free spirit who appears to have led a very relaxing life. Whereas Shizuku has clearly been groomed into a young Yamato Nadeshiko （大和撫子）. For those of you too lazy to click that link if you don’t know what that is, think ojyousama type personality. The game then revolves around Shizuku trying to properly convey her love to Ellis, all the while Ellis does it for her effortlessly. There ends up being many hilarious situations, primarily because Shizuku is such a prude and a bit tsundere.

Plot/Character Growth:  9/10
The plot for a game like this, which is generally not such an important part of the game, is actually quite good. And it is also better than the other Sonohanabira games I have played. Both characters drastically change throughout the story and it’s really quite endearing. There is a ton of jokes and various comedic elements as well. Some bizarre quotes from apparently famous Japanese books as well (that was fun to decipher!). Only thing preventing a perfect score is I feel there could’ve been more information about the characters, in particular Ellis. It isn’t as though I’m saying there wasn’t enough though, there is quite a bit, I would’ve just preferred a bit more.

CG/Interface/Art: 8/10
This game runs in an 800×600 resolution. Which is kind of low, I would’ve preferred high for obvious reasons, but it gets the job done. The actual CG and sprites are gorgeous. They are drawn in a very smooth, cute way. There aren’t any expressions or CGs I did not like. I absolutely love how they draw these characters. The backgrounds not so much though. The backgrounds are all very plain with the exception of the school garden, which looked pretty much amazing. Some of the cutest scenes and CG I’ve ever seen are in this game. The interface itself (options, menus, GUI) are pretty standard stuff. Nothing in particular is missing, you scroll using the mouse to go backwards, and scrolling forward doesn’t advance the game (which I like). 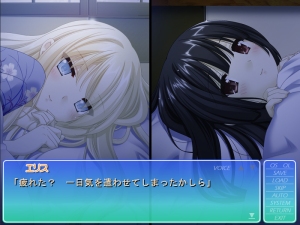 Music/Voices: 8.5/10
The voices for these two characters are absolutely amazing. I love both of their voices, especially Ellis’s. It really captures what you think they should sound like. They both sound very beautiful and almost soothing. The other voiced characters, which are usually labeled “GIRL A B C D” etc, have some interesting voices as well, not particularly soothing though (“kyaaa” in particular, lol). The game’s music is pretty average, I would even say it’s the weakest part. I don’t even really remember the music, it wasn’t really that bad, but nothing you can tap your foot to or hum.

Ero: ~/~
I am not a fan of ero in games generally, I enjoyed certain parts, but… I really just don’t care about it and thus won’t even rate it. I will say that the art for the ero CG was fantastic for the most part.

I loved this game and if you liked any previous Sono Hanabira game I guarantee you will too! Don’t forget it has a really cute and endearing story to go along with the art as well. If you’re a fan of yuri but would normally just ignore this since it’s considered Nukige, I’d beg you to reconsider.

I leave you with an amazing related image! Thank you for reading!^^ 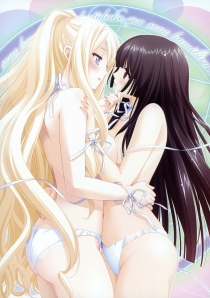 Getting used to this whole setup isn’t too bad, I’ve never worked with a blog before though (or website building of any kind for that matter).

So, the first game I plan to review is Sono Hanabira 8. It is a yuri eroge, I really love yuri <3. I should have this review up within a week. I’m still playing it and I don’t read particularly fast yet. I have read/watched/played lots of yuri stuff and think I have a solid grasp on the genre. The review will be pretty in-depth and I will do my best to make it awesome and full of cute, like the following image.